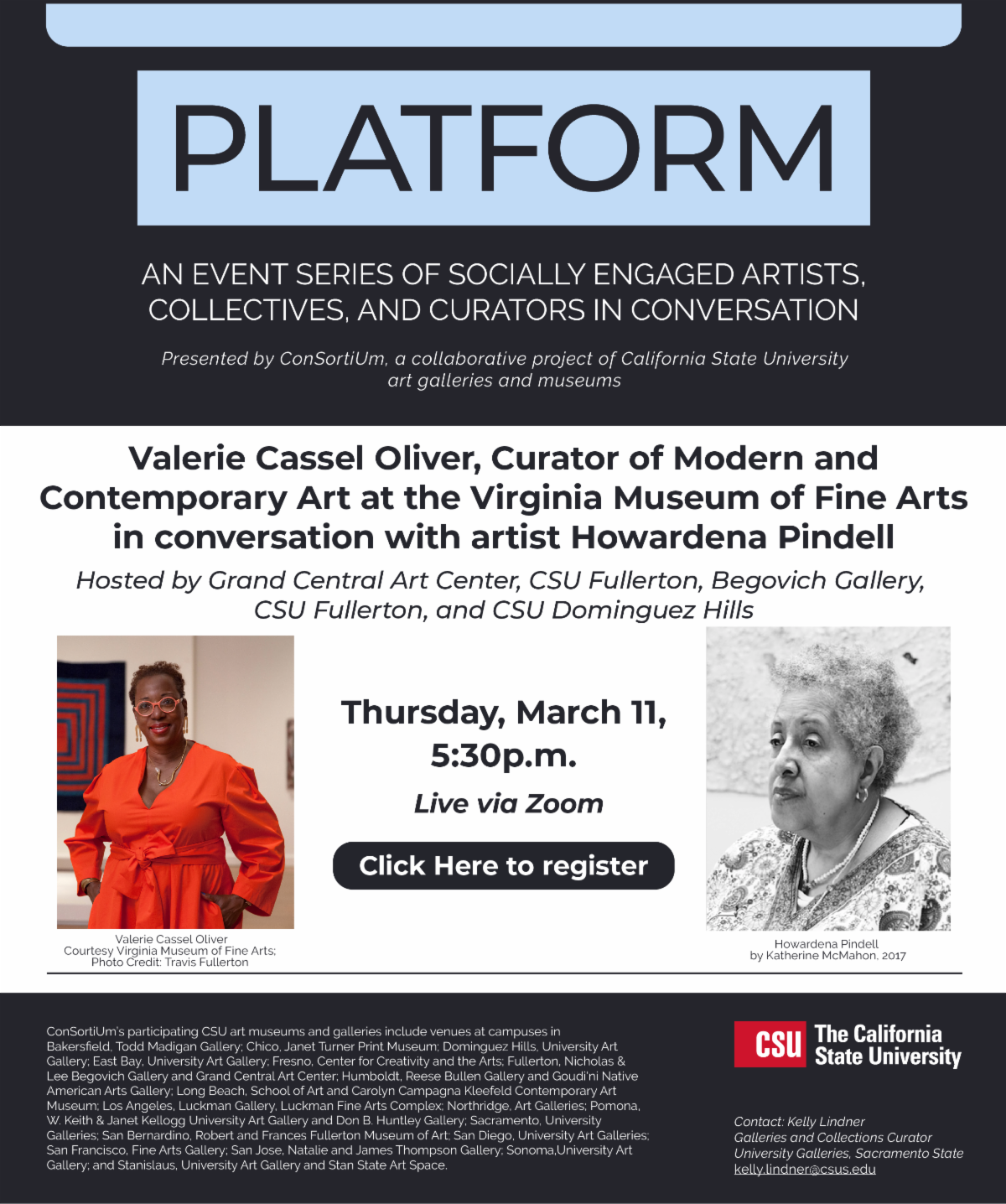 Valerie Cassel Oliver is the Sydney and Frances Lewis Family Curator of Modern and Contemporary Art at the Virginia Museum of Fine Arts. Prior to her position at the VMFA, she was Senior Curator at the Contemporary Arts Museum Houston where worked from 2000 - 2017.  She has served as director of the Visiting Artist Program at the School of the Art Institute of Chicago (1995-2000) and a program specialist at the National Endowment for the Arts (1988-1995).   In 2000 she was one of six curators selected to organize the Biennial for the Whitney Museum of American Art.

Her 2018 debut exhibition at the Virginia Museum of Fine Arts was a 50-year survey of work by Howardena Pindell entitled Howardena Pindell: What Remains to be Seen.  The exhibition co-organized with Naomi Beckwith, the Manilow Senior Curator at the Museum of Contemporary Art Chicago, was named one of the most influential of the decade. Most recently, Cassel Oliver organized the exhibition, Cosmologies from the Tree of Life that featured over thirty newly acquired works from the Souls Grown Deep Foundation.  She is currently developing the group exhibition, The Dirty South: Contemporary Art, Material Culture and the Sonic Impulse, scheduled to open at the VMFA May, 2021.

Cassel Oliver is the recipient of a Getty Curatorial Research Fellowship (2007); the High Museum of Art’s David C. Driskell Award (2011); the Arthur and Carol Kaufman Goldberg Foundation-to-Life Fellowship at Hunter College (2016) and the James A. Porter Book Award from Howard University (2018). From 2016-17, she was a Senior Fellow in Curatorial Studies at the School of the Art Institute of Chicago and, in Spring, 2020 she participated in the University of Texas at Austin’s View Points series with Hamza Walker.

Cassel Oliver holds a M.A. in art history from Howard University in Washington, D.C. and, B.S. in communications from the University of Texas at Austin.

Born in Philadelphia in 1943, Howardena Pindell studied painting at Boston University and Yale University. After graduating, she accepted a job at the Museum of Modern Art, where she worked for 12 years (1967–1979), first as Exhibition Assistant, then as Assistant Curator in the Department of National and International Traveling Exhibitions, and finally as an Associate Curator and Acting Director in the Department of Prints and Illustrated Books. In 1979, she began teaching at the State University of New York, Stony Brook where she is now a full professor. Throughout her career, Pindell has exhibited extensively. Notable solo-exhibitions include: Spelman College (1971, Atlanta), A.I.R. Gallery (1973, 1983, New York), Just Above Midtown (1977, New York), Lerner-Heller Gallery (1980, 1981, New York), The Studio Museum in Harlem (1986, New York), the Wadsworth Atheneum (1989, Hartford), Cyrus Gallery (1989, New York), G.R. N’Namdi Gallery (1992, 1995, 1996, 2000, 2002, 2006, Chicago, Detroit, and New York), Garth Greenan Gallery, New York (2014, 2017), Spelman College Museum of Fine Art, Atlanta (2015), and The Shed, New York (2020). Howardena Pindell was the subject of the 2018 retrospective at the Museum of Contemporary Art, Chicago titled Howardena Pindell: What Remains to Be Seen, which traveled to the Virginia Museum of Fine Arts (2018) and the Rose Art Museum (2019).

Pindell often employs lengthy, metaphorical processes of destruction/reconstruction. She cuts canvases in strips and sews them back together, building up surfaces in elaborate stages. She paints or draws on sheets of paper, punches out dots from the paper using a paper hole punch, drops the dots onto her canvas, and finally squeegees paint through the “stencil” left in the paper from which she had punched the dots. Almost invariably, her paintings are installed unstretched, held to the wall merely by the strength of a few finishing nails. The artist’s fascination with gridded, serialized imagery, along with surface texture appears throughout her oeuvre. Even in her later, more politically charged work, Pindell reverts to these thematic focuses in order to address social issues of homelessness, AIDs, war, genocide, sexism, xenophobia, and apartheid.