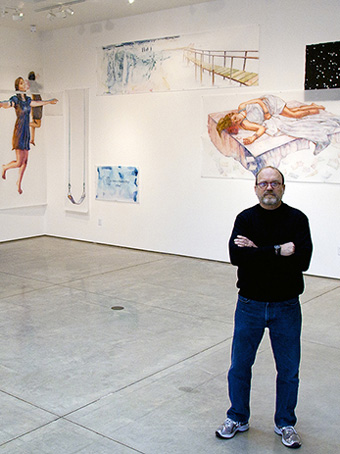 Michael Barton Miller, artist and college professor, passed away Friday November 14, 2014, following a two-year battle with brain cancer. He was 65.

Born March 17, 1949, in Buffalo, NY, the second of seven children, Michael was raised in Phoenix, AZ. He developed an interest in art and culture beginning in his childhood, and he was active in school plays, filmmaking, and visual art projects throughout his youth.

After earning a bachelor’s degree in Political Science at Arizona State University, Michael moved to northern California to join a film collective in Berkeley in the mid-1970s. During this time he also began experimenting with drawing and painting and produced a number of commissioned murals, most notably a series that can still be seen inside the Mendocino County Courthouse. Michael’s mural sequence, based on in-depth research into local history and culture, is an early example of his lifelong commitment to what he would later describe as cross-disciplinary work in the visual arts.

Eager to expand his artistic practice, Michael returned to school to pursue further studies, first at San Francisco State University and then at U.C. Irvine, where he received a BA in Art with Honors in 1986. Michael then pursued graduate studies at the University of Southern California, where he also began a long teaching career, first as a graduate student teaching assistant. After earning his MFA from USC in 1988, he subsequently taught at Pomona College, California State University Long Beach, and a number of other institutions throughout the Los Angeles area.

In addition, shortly after completing his graduate studies, Michael took a position as Chief Preparator at Meyers/Bloom Gallery in Los Angeles. An important venue for conceptually-based art during the late 1980s and early 1990s, Meyers/Bloom provided Michael with opportunities to work with renowned artists such as Boyd Webb, Marilyn Minter, Bertrand Lavier, Gretchen Bender, and Vik Muniz.

Shaped by myriad influences that include anthropology, film, literature, poetry, and critical theory, Michael’s studio practice was dynamic and wide-ranging. His keen powers of observation, along with his unique and finely-tuned sense of color, line, form, and composition, are evident throughout his drawing, watercolor, sculpture, and installation projects. Above all, he approached art as a calling, and he firmly believed in its transformative potential, that art could—and frequently did—change the world.

In 1997, Michael joined the full-time faculty in the Department of Art and Design at Cal Poly, where he taught drawing, intermedia, and critical art practice. He brought to the department his expertise in cross-disciplinary visual arts, which motivated and informed a number of his major achievements at Cal Poly, including the expansion of a cultural exchange program between Cal Poly and Silpakorn University in Bangkok, in which artists from each location would travel to the partner institution to pursue research and produce new work. In addition, Michael initiated and oversaw the Visiting Artist Guest Lecture Series in the Department of Art and Design, which brings artists, scholars, curators, and critics from throughout the United States to Cal Poly to deliver a public lecture about their work; some of the speakers Michael brought to campus include internationally-acclaimed artists Rirkrit Tiravanija, Dinh Q. Lê, and Christopher Brown and art historians, curators, and critics such as Amelia Jones, Tyler Stallings, and Sue Spaid.

Both of these programs, along with Michael’s numerous other efforts and accomplishments, were motivated by his passion for rigorous artistic practice and critical engagement. They were also designed to expose students to a diverse array of contemporary developments in art and culture both locally and globally. Indeed, with these and related programs, as well as his teaching more generally, Michael continually provided students with opportunities to expand the breadth and depth of their technical skills as well as their wider knowledge of the arts. A gifted and enthusiastic teacher, Michael was known for his generosity with students, many of whom have named him as a formative influence during their undergraduate studies.

Esteemed by his colleagues and respected and admired by his students, Michael’s exceptional contributions were widely recognized at Cal Poly, and in 2005 he received the Richard K. Simon Award for Outstanding Scholarship or Creative Activity in the College of Liberal Arts. In 2005-06, he received the university-wide Cal Poly Distinguished Teaching Award.

In 2012, Michael was diagnosed with brain cancer, and during the subsequent years the tumor affected the area of the brain responsible for language. Michael faced this devastating loss with courage and took the opportunity to devote more time to his spiritual and meditation practice. He also continued his daily practice of drawing, and the detailed drawings and vibrant watercolors that fill his sketchbooks, along with the sensitive and thought-provoking writings he composed during his illness, are a testament to the remarkable talent and brilliant intellect for which Michael was known throughout his life.

Michael was also known for his sense of humor, especially his playful jokes and wry wit, with which he would lighten even the most stressful moments, as well as his quirky, often quite savvy, verbal impressions, with which he would entertain (and occasionally exasperate) his family, friends, colleagues, and students. In addition, he will be remembered for his avid curiosity, passion for knowledge, depth of character, resolute sense of ethics, selfless generosity of spirit, and steadfast friendship. Above all, Michael had a penchant for both the sublime and the beautiful, the serious and the absurd, and he leaves behind an enduring legacy in the legions of students he taught, the countless personal and professional connections he made, and his eloquent, incisive, and inspired vision as an artist.

Our thoughts are with his family, especially our colleague and his wife, Tera Galanti, also a professor in Art & Design.